‘How could I have remembered the day I was born?’

releasing the buried effects of trauma at birth using regression

Miriam came to see me for Hypnotherapy to help with her physical health. She had three children and a demanding job, but a recent traumatic operation had left her with health problems, including the onset of extreme anxiety as well as painful and debilitating symptoms of Chronic Fatigue Syndrome.  She was so incapacitated, that she questioned whether she would ever get better.  In the time off she was forced to take in order to rest and recuperate, she reflected on the way she had driven herself all through her life and on the hard circumstances of her childhood.  As an only child of parents who worked long hours to make ends meet, she was looked after by many different childminders when very young, but from the age of six she spent much time alone in the flat and had to take on household responsibilities like providing meals for her parents. She had to look after herself and meet her own needs as well as those of her parents. This left her burdened with a sense of responsibility and the pressure to ‘be a good girl all the time’.

Miriam’s relationship with her father was troubled (he had wanted a son). She knew that her mother loved her deeply but often experienced her as distant and preoccupied which left Miriam anxious, unsure and with difficult feelings of low self-worth. She longed for her mother’s attention, but rarely received the supportive love she needed in her early years and so concluded that she did not deserve it. That left her feeling insecure, isolated and anxious. As an adult, Miriam realised that her mother had always battled with depression.  While her father had died years before, her mother was now ill and dependent on her, adding to the load of responsibility she was attempting to deal with. While she desperately wished to support her mother lovingly, she found herself feeling cold and blocked. In her own words:

“A feeling of stiffness, sometimes like a snake coiling around my body, to then make its home in my throat, choking me, leaving me unable to speak, overwhelmed and frozen There was also a certain unavailability in her, a quietness, a distance that at times I felt, a wall I couldn’t get through, moments that she was far away, not seeing me. I had learned quite quickly there was no point in trying to get her attention anymore. And lately she became ill with Parkinson’s disease, she became more and more like that, retreating into those places and I would get this feeling more and more, draining my energy and growing my frustration”.

Miriam was born in Eastern Europe under a harsh regime. For her mother, this was the third pregnancy after losing two babies shortly after their birth, an experience which had traumatised her so much, that it was five years before she had the courage to try for a baby again. The family lived far from a city, and consequently the hospital was a long way from home. Because of the previous severe complications, she had to be monitored regularly, which meant travelling alone hundreds of miles to the hospital every month. While in the hospital, her waters broke early and Miriam was delivered by emergency Caesarean.

Having done some other work to clear traumatic feelings around the recent surgery, we scheduled a regression session in order to trace back and clear Miriam’s continuing feelings of being undeserving, unloved, fearful and unsupported. We used the choking, frozen knot in her throat as our start point and followed it back to the very first time her body remembered feeling it. We seek access to the traumatic trigger, not via the rational mind and conscious memory, but via feelings and body memory, whereby a trace of every shocking or traumatic experience continues to be held in our physical systems.

Under hypnosis, Miriam regressed to the day of her birth, soon after the emergency Caesarean. While her mother lay in bed, stiff, silent and unresponsive, Miriam was aware of lying and crying in the arms of a strange woman. It felt as if her mother was too scared to hold her and bond with her. Miriam herself felt gripped by fear, tension and extreme anxiety.

We worked with all the fear, grief, tension and anxiety Miriam experienced as a day old infant in order to release those difficult feelings of unworthiness about herself which took root through that experience.  Afterwards Miriam expressed how extremely moved she had been by the session, during which she had developed huge compassion for her mother. A little later, she sent me the thoughts she had put down on paper after the session as well as some drawings she had made some time before our session, in an attempt to express her painful feelings on paper.  These included one of a faceless woman holding a tiny baby at arms-length from her body.  This is the drawing, made and dated March 2016, several weeks before our regression session at the end of April in the same year: 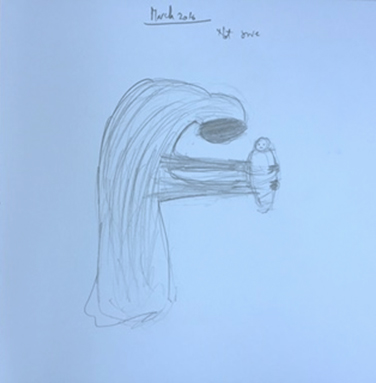 Now I am handing over to Miriam herself to finish the story:

“I am so glad we went to follow the feeling back. I had done these drawings a couple of months back but had no idea where they had come from and what they meant. They were a simple way of putting my “overwhelm” on paper and in doing so, gaining a little relief….

I spoke to my mum on the evening after the regression, perhaps for the first time on the same platform of sorrow, broken woman to another broken woman.  She told me how after she gave birth to me she was agitated and tried to run out of the hospital and the doctors gave her a strong sedative. Another woman nursed me and nurses held me for a couple of days until she was together again and able to see that I was alive. She had already lost two children after giving birth to them. The first birth she had was a normal delivery, a girl who only lived for an hour, no one could explain why…. Another birth a couple of years later, a Caesarean, gave her a boy who lived for six hours, she held him before he died. The doctor said it was pulmonary atelectasis, a fancy word she couldn’t understand and he didn’t explain. Meanwhile she had a post-operative infection, with high fever, retained placenta and had to have another operation. She wanted to die. A couple of years later, she plucked up the courage and tried again, for me, and had to go to Bucharest monthly, across the country on a 600 miles round trip for monitoring.  I came out a few days early, her waters broke and she had an emergency Caesarean, again alone in the big City and somehow she couldn’t face the outcome. I came out into the world into so much anxiety, pain, disappointment and loneliness.

And now, after the regression, I know what that feeling was, I know where she went when she was quiet and not seeing me, carrying silently her pain. And most of all, I understand that this was the feeling of growing up with invisible siblings, with whom I unknowingly shared her love. I also know what this strange drawing that I did a couple of months back meant. How could I have remembered the day I was born? It is interesting that following back my body sensations and feelings may have led me to the memory held in the nervous system or the ‘brain’ in my gut and in my heart and I know that neuroscience is catching up now with the esoteric traditions in confirming that.

With this knowing comes a peace I didn’t feel for a long while and I can begin to start looking at putting myself together again. I will still have to deal with the many consequences of my choices and habits made from that place of doubt, often preferring that oh so familiar emotional unavailability to real connectedness but somehow I am ok with that because I have known both through my mother and other relationships and hopefully will be able to build on that.

I am happy for you to share this letter, or parts of it with clients if you wish.

I am still in touch with Miriam, who continues to gain strength, physical health and emotional relief. She tells me that she has not experienced that suffocating knot in her throat since our session.